Day 7:
I was touched in a way that was unexpected. After we distributed our students' belongings to them, the entire staff drove around the neighborhood in a giant car parade. There were signs on our cars. We all honked. It took about 30 minutes.
I got choked up three times when I realized the magnitude of what was going on. Most of our families struggle financially. Most parents don't speak English. Many had multiple jobs in order to feed their kids, but are now unemployed.
As we drove through the neighborhood, families were recording the parade on their phones. They wore authentic smiles. They waved excitedly. Some had made signs for us telling the teachers that we were loved and missed.
Families who had no children at our school stood outside and participated. They were all so genuinely happy that we did this for them, for this neighborhood, for the community.
I had to hold back the tears when I realized that these people had been indoors watching scary things on TV, knowing they had no job to go to, seeing that the stores were out of TP again. And, we were a ray of light for 30 minutes.
Hopefully this will never occur again. I am so sad that it happened, but am so glad I got to be a part of this. I had never experienced anything like this with so many people I didn't know in all my life.
We'll get through this. We need to stand together...six feet apart. 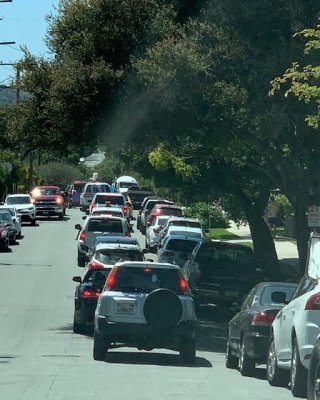