🐷 We decided to sponsor a pig. His name is George.

🐷 “George was the runt of a litter born at a New York petting zoo.
At four months old, he only weighed seven pounds—around the size of a two-week-old piglet. He couldn’t compete with his siblings for food and became so sick he could barely lift his head. However, instead of getting George the care he needed, the petting zoo owner simply left him to die.

A concerned visitor helped rescue George and arranged his placement with Farm Sanctuary. We worked with his veterinary team to treat his illnesses and help him put on weight. George was dull and lethargic at first but began perking up as he recovered—ultimately running zoomies around us! Today, George is a healthy, curious, and playful pig who loves belly rubs and cuddling with his friends.” 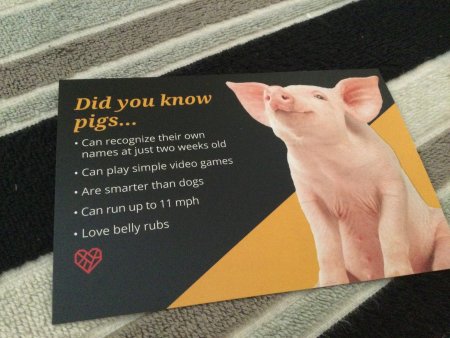