On this day as the story begins, Frodo is about to turn 50! Bilbo left after his 111th birthday 17 years ago, and Frodo hasn't heard from him. But, despite all the naysayers in the neighborhood, Frodo is absolutely sure Bilbo is alive and well somewhere. On the day of their birthdays, Frodo throws a small party to celebrate his 50th and Bilbo's 128th birthdays. It's a good day but a bittersweet one. Bag End is his no more.

Gandalf came to the Shire in spring to give Frodo news about the Ring. He told Frodo he must get away as the Enemy was sure to find him now that they know the One Ring is in the shire. Frodo makes plans but tells Gandalf he won't be rushed. "I can go quietly or quickly, but not both!" People were still talking about Bilbo's disappearing in a puff of smoke, never to be seen again!

Gandalf agreed to give Frodo time to move to Buckland but insists that he make haste. Over the next several months, Frodo's friends help him pack Bag End which he sells to the disagreeable relatives who have wanted it for 50 years.

And now it is the 22nd of September. Spring and summer have passed with no word from Gandalf. Alas, Gandalf did send a message, and urgently, but it was never delivered. As the night of his 50th birthday closes, Frodo, Pippin, and Sam prepare to leave, and they have no idea how closely the Enemy draws near.

"The road goes ever on and on..." and we'll begin walking it tomorrow. Welcome to the KindSpring Eowyn Challenge!
♥. 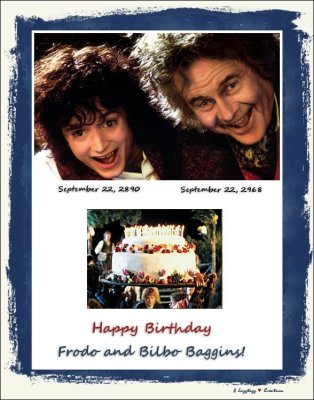