What I learned from a little girl at a train station

--by gmathewvellore, posted Jul 18, 2016
Lately, I had become so cynical about finding goodness in people looking at the happenings around the world. But I have also been pleasantly surprised by goodness in unexpected people. I am beginning to realize that goodness still exists in the world if only we have the grace to be surprised by goodness from unexpected people. A few weeks ago I had gone back to my hometown and I was traveling by train to visit a friend in the comfort of a new air-conditioned coach while it was blisteringly hot outside. After a few stations, the delivery man from the cafeteria in the train came around to deliver the pre-booked hot meals and drinks. Just behind him rushed in a young girl, maybe 9 or 10 years old obviously used to begging and put out her hand pleading for some food just with her gestures but no words. The food supplier was indignant at this intrusion and caught her roughly by her hair and pushed her out of the coach and shut the door. Previously I would have thought that it was good riddance the man has got rid of a nuisance. (which is very common in India). Something in me made me react, maybe the harshness of the man or the frightened and pleading look on the child's face. I stepped outside the door and saw the child still standing there and crying. I asked her if she was hungry and she nodded vigorously patting her tummy. I asked her when she had her last meal and still without speaking a word held up two and then three fingers. I grabbed her hand and said I would buy her food and walked to the coach with the cafeteria. I could see the fear in her eyes and feel the trembling in her hand that I held. We reached the dining car. The commuters standing there had a puzzled expression on their face seeing the little girl with me. I sensed that some were sniggering. Without taking any notice of their reaction, I asked her to choose whatever she wanted from the food displayed on the counters. As I pointed to each item she kept nodding. 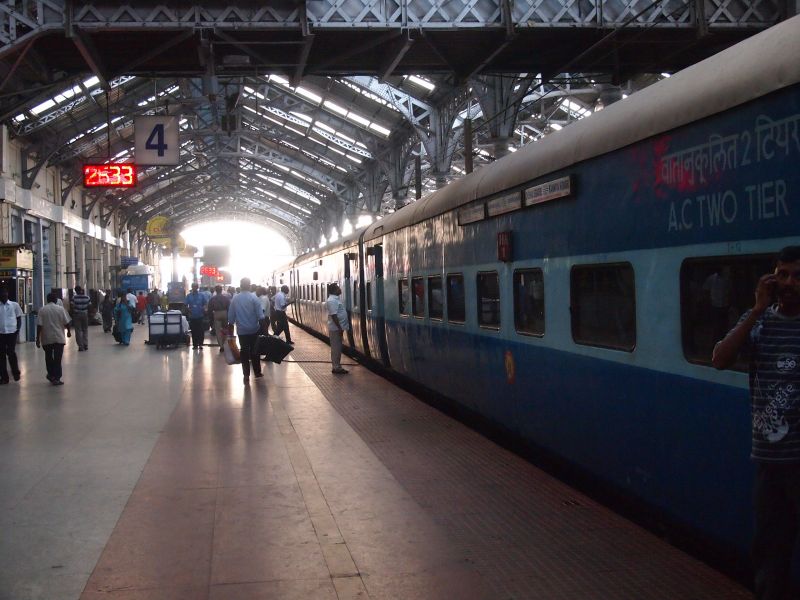 At the end, there was so much food and I was wondering how her little stomach could eat all that food. I quickly stole a glance into my wallet to make sure I had enough money for all that food and found was just enough money left after paying the bill, for my taxi fare from the train station to my friend’s home. The little girl could not hold all the food in her hands so she held up the hem of her long skirt to form a hammock and piled everything into it and while I turned to the cashier to pay the bill she went started hurrying down the train as fast as her little legs could carry after flashing a nervous big smile. The cashier shook his head in disbelief and admonished me for being a real sucker. He said the girl must be laughing her belly out for having fooled me into believing her misery.

As I started to walk away my old cynical-self began to wonder and the cashier’s words worked on my mind to start doubting if she had really fooled me and taken me for a ride. So I decided to turn back and go down the train following the direction, the little girl had taken to see what she was up to. After walking through a few coaches I walked to a relatively deserted coach and I could hear squeals of little children. When I walked to its source I saw a sight which left me dumb-founded. There was this little girl sitting in a circle with two other miserable looking boys who seemed almost the same age. The young girl had put all the food in the center in a pile and was also putting food into the hand of a young boy who was obviously blind. When they sensed my presence they froze, went quiet I could see fear in their eyes. I crouched next to the young girl, smiling and whispering to them to continue eating.

On an impulse, I asked the little girl to open her mouth to put some food into her mouth as a gesture of friendliness. To my horror, I saw that most of her tongue was missing and she made a sign to show that it was cut.

I am a man hardened by life’s experience and had always thought that I was tough. I could not help tears from flowing down my cheeks, realizing that these young kids have been mutilated by vicious and heartless men to earn a living using them to beg. I quickly got up and turned around after patting their heads and saying goodbye, so that they don’t see me crying. I turned back feeling miserable and after I took a few quick steps around the coach I could again hear the squeals of joy, they were back to eating and sharing. Although I was weeping all the way, I went back to my comfortable coach feeling happy that I was able to bring momentary joy and laughter to these unfortunate children. My mind kept wondering what rest of their life was going to be for these kids. We passed many stations and before I got off, I went looking for them just to see them again and to find out more about them but they were not to be seen. Obviously, they got off somewhere in-between stations.

I stood on the railway station platform after I got down thinking about what I had experienced. I realized that I had received far more than I gave. This little girl restored my belief in goodness of human beings again. By her actions, she taught me that there is more joy when you share, that even in your utter poverty one can be generous, kindness springs from the richness of our soul and not the richness of our environment. I pray I do not forget this amazing encounter with this little girl or the lesson she taught me, for as long as I live.
6167 Reads

MAGGIE1234 wrote: Thank you for being such a kind and giving person!
Satish Kumar wrote: So emotional, it made my also crying. Remembering those train days and same situation. We all need to contribute. Thank you for inspiring and motivation!
petroskryf wrote: This story brought tears to my eyes and soul.
Eckyssister wrote: Thank you for the reminder that there is beauty and miracles all around us.
cf wrote: I have found that the people most willing to help me when i was in need (however relative need is in germany when compared to india) were those who had little.
laughingsoul wrote: Happy I found this post again. This story is very touching. Could it be possible to find the girl look into what she needs to go to school and eat 3 meals a day and put her up on gofundme? Could we make a difference for her?
Novice50 wrote: You gave so much more than food. And to use your words, you showed so many people the meaning of "looking for kindness in unexpected people." Blessings and love to you.
preciousmolefe89 wrote: Thank you for sharing your story. May we all be encouraged to make a positive difference in another human beings life. "give the world your best anyway" mother theresa
DANCE wrote: wow, this made me feel so much love in my heart, thank you!
mnc_91 wrote: Thank you for your beautiful act of kindness :-) Tummy full kindness that was :-)
Pages