Righting A Wrong With The Missing Post-It Notes 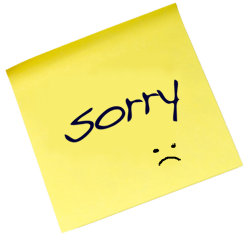 I recently posted a story about my coworker whose bright coloured Post It Notes had been taken by someone from her desk. She had bought them with her own money, and she was not happy to return from a day away from the office to find that the Post Its had disappeared. Someone had taken them. When I learned about what happened, I told her that I had some similar Post It Notes at home that I would bring in and give them to her, as I wasn't using them.

When the items had gone missing from her desk, she had sent an email to all our staff to advise that someone had taken her items and that if they were found, they should be returned to her.

Today, she told me that the missing items had magically reappeared on her desk, no note from the person who had taken them. She asked me if I wanted her to give back the replacement Post Its that I had given to her. I told her to keep them.

Sometimes, people make mistakes, and she was glad that whomever had taken them did the right thing and returned them to her when they realized their error.

Learning from our mistakes is a good thing, as is offering forgiveness. Sometimes, it just takes a little bit of effort.

Painiacs wrote: Hopefully whoever took them just thought they were borrowing community office supplies not personal items
AndiCas wrote: It's good to hear that there has been a happy resolvement of that incident.
splain wrote: Well it was resolved and the person who took them hopefully has learnt a good lesson
Mish wrote: Perhaps the person was touched by the kindness you create there by your actions and it sparked them.
mindyjourney wrote: Wow! Love how everything was returned <3.
kjoyw wrote: Amazing story! So love the Post-It note idea!