The Residents at The Assisted Living Center, and the Lost Kitten

Too many adventures! My father, who is in assisted living, likes to sit in the lobby as there is a fireplace there and he enjoys reading by it and greeting people as they come in and out. He moved a globe that decorates the room close to the fireplace and on a table right next to him. He does this every time. Finally the director asked him why he does that. My dad responded that he is keeping an eye on global warming.

My dad taught high school for 30 years and took a course in stand-up comedy so as to better keep the attention of his students. I'd say he's still got it. He told me he will do what he can to talk about global warming to any one who will listen.

He sometimes asks about my poetry box so I told him about KindSpring member Mindy's poems and the peace doves. He told me he would like to hand doves out at his facility. He said that would be a very big deal there. So I am making a bunch to send him.

This morning I entered the nursing home and was immediately told that one of the residents was asking where I was and he had been wheeling up and down the corridor looking for me. I went to his room first and played for a half hour. He always loves the music. He puts down his current mystery and dozes to the strains. I wasn't able to make it to his room last week and he was so sad about that. I won't miss his room anymore.

I played to another woman who was actively dying. Her eyes were shut and her hands very cold. She was breathing sporadically. The hospice nurse was very glad I was there. I played slow and unwinding music. 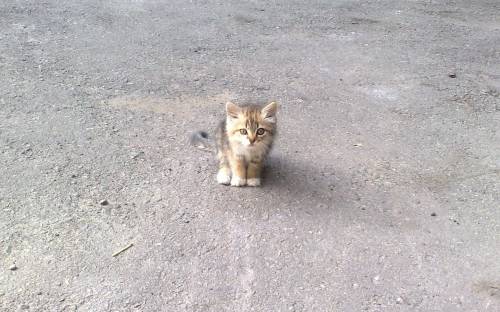 On my way home, traffic was held up in front of the University stadium -- it is a busy area and a young woman was trying to get a tiny (maybe 8 weeks old) kitten out of the the road. The kitten was terrified and she finally got the little one but dropped him. The kitten ran to the curb and lay there in shock. I pulled over and got out as she had gone back into her truck (maybe since the kitty was out of the road her part was done) and simply scooped him up.

As I was doing so, two beautiful young men pulled over and asked if I needed help. well, I said, maybe. I showed them the kitten and popped him into the cab of their truck. They were instantly in love, calling moms and girlfriends. They also knew where the shelters were in town.

lindariebel wrote: Kittens are god's way of eliciting kindness and cuddles.
Pyronik wrote: Fab adventures
Pyronik wrote: I love that your dad was so into teaching he took the comedy class. I bet the kids loved him :-)
leoladyc728 wrote: your dad still sounds really spunky. Thanks for helping to rescue the kitty.
SissyLee wrote: Yeah -- he has his moments!
That little kitty had quite a chain of human helpers today -- the girl who stopped traffic, me who lifted her from the gutter and the two sweethearts who took her. She is safe.
Mish wrote: Love your Dad! ðŸ‘ðŸ‘ðŸ‘
mindyjourney wrote: Wow!!! So many kindness adventures indeed, my friend â¤ï¸. Doving, harping, rescuing kitties....seems you are truly listening and taking action on those Universal nudges :))). Thank you for keeping up with that higher vibe! :)))