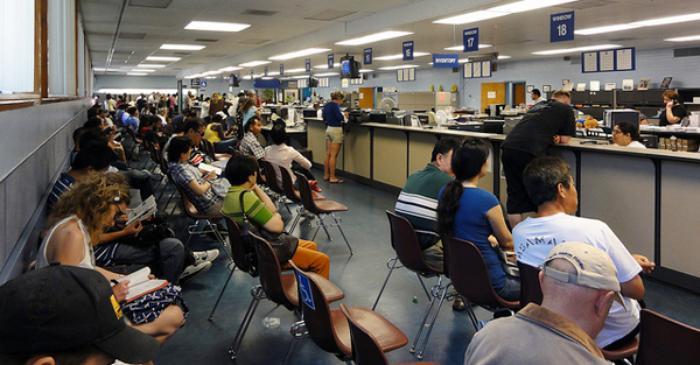 t an appointment. For anyone who has done this in Silicon Valley, you might know the frustration that can be encountered and the time this can take. Well, I got there and there was no line to get a number, but I did have about 25 people in front of me with their own numbers.

I sat there patiently, just watching people. A young man had gotten up to the counter and had no cash to pay his fee; yep, they only take cash or check... do people still write checks? :) Anyway, he was explaining his situation to the gentleman next to me. I think he felt comfortable doing this, as they were of the same ethnicity. Alas, he didn't have any cash, either.

I had been listening in and, before he had a chance to ask, I thought, "Wouldn't you know it... I have enough cash for both his fee and mine!" I offered him the money and he wanted my info so he could repay me using Venmo. Although I use this app, I opted for a different form of repayment. :) I happened to have one Smile Card in my wallet, which I try to carry around all the time.

I offered him the card and said, "You can do this as a repayment."

He really wanted to just return the cash, but there was no way he could without my help and I just insisted he pay-it-forward.

Not long after that, I was called up, got my business done and I was out fo there; less than 60 minutes in DMV without an appointment and I'm done. That is unheard of! I've spent longer there with an appointment. Maybe this all went so smoothly because of my chance encounter with this young gentleman, maybe not. I'll never really know.

But, I do choose to believe that, as we spread our own kindness in the world, it ricochets back to us in multitudes.
932 Reads

lindariebel wrote: I agree with mindyjourney!
gilbert100 wrote: Kindness has a power all it's own. I believe kindness can be a facet of love in the way it can make a total stranger feel. And i agree that everything in this world always comes back to you be it good or evil. However , good can come back in all shapes , forms and can become pregnant with it's own inertia. You did a wonderful thing. My hat is off to you dear one :)

smileswithhope wrote: Wow, what a kind act! Sounds like you made the dmv visit much brighter for both him and you! :) and probably the people around you who witnessed or overheard. :)
mindyjourney wrote: Thank you for following that kindness nudge and paid the manâ€™s fees :)))). And yes, the Universe loves that giving flow, btw ðŸŒŠ.
Christine88 wrote: What a great act of kindness. I'm sure he was in shock of it too. I'm happy to read this.
kjoyw wrote: Very kind of you! Sounds like you saved the day for him and also for you and all of the folks behind you in line. And, yes, some people still write checks. Iâ€™m one of them!
Drjoybug wrote: Ya just never know....what goes around comes around â£ï¸â£ï¸
Mish wrote: Your kindness attracted universal return of kindness to you, cyctw. ðŸ‘
DANCE wrote: Thank you for your kindness