--by lewski711, posted Jan 4, 2020
I was dropping my mom and sister off at the train station after their holiday visit. On the way I saw a man in a wheelchair in an empty lot. It looked like he wasn't wearing shoes.

After dropping off my family, I went back to the lot and he was there. His chair was on the incline that lead to the street and it looked like he was struggling with his bare foot to keep from sliding into the street.
I asked if he wanted me to pull him back up. He nodded. I asked him to pick up his feet and pulled him back up into the lot. He didn't respond when I asked if this was far enough. Then, I opened the box I had brought with me. It was a shoe box with an old pair of shoes that I had kept in my car in case I found someone in need.

You should have seen the look on his face. First it 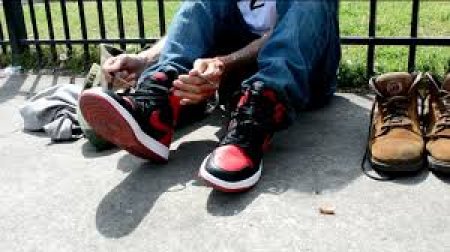 was shock, then it was sheer delight. When he spoke, I couldn't understand what he said, but I knew he was thanking me.

On the way back to my car I saw a couple who were in need and gave them a couple of my homeless bags. As I drove past the first man, I saw he had already put on one shoe and was working on a second.
Keeping old pairs of shoes in my car for situations like this is so much more important than throwing them out or selling them at a yard sale.

Jane wrote: I’ll be taking your lead and keeping my ole shoes in the trunk. What an excellent idea. Thank you for sharing. Your idea and yourself
Mish wrote: Wow. Just Wow. Bless you, Lewski.
lindariebel wrote: Brilliant idea!
Christine88 wrote: Very beautiful
dotmatrix wrote: Beautiful kindness. Thank you. ♥.
TracyQS wrote: This is beautiful, and so, so shareable. I will begin this practice, and hope that others will too. 💖
mindyjourney wrote: I love how you are always kindly prepared! The Universe knew why you had those shoes with you :))). Thank you, my friend.
MakeSomeoneSmile wrote: That is awesome, nice going!
outdoorsy wrote: Such a great idea!!!
smilinghearts wrote: Yay!!! Great actions!
Pages