“For years, Chef José Andrés and his charity have been praised for feeding the world’s most vulnerable people—and now, he is turning his own 5-star restaurants into food kitchens for families who may be having trouble making ends meet during the COVID-19 outbreaks.

Although Andrés announced that this restaurants will be closed to the general public until further notice, the celebrity chef did say that eight of his acclaimed Washington D.C. and New York City locations would still be serving gourmet food to out-of-work families and struggling workers.

The soup kitchen employees will be asking for $7 per to-go meal, but for “those who cannot afford to pay, we will welcome as well,” Andrés added in a statement.

The makeshift soup kitchens will begin serving takeout meals starting today between noon and 5PM. Furthermore, all of his employees will be getting paid time off for the first two weeks.

Andrés’s charity, World Central Kitchen, has also been serving up meals to people affected by the coronavirus, including the quarantined cruise ship passengers and staffers aboard the Grand Princess.

From Little Rock, Arkansas to San Francisco, the charity has already served up several thousand meals to students and families amidst school closures.” 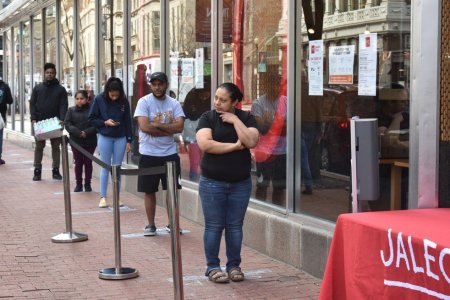 Yassin Barakat wrote: Chef are important to people 👨‍🍳
pluto178 wrote: Some people are just born amazing and then do not let their destiny down. X
Brad2 wrote: I wonder if they deliver to Western Canada lol, this is a good post about cooks and chef kindness, making chicken soup for myself to keep warm at the moment, this story warms my soul, good stuff, thank you.............peace.
Mish wrote:
📷 PHOTO CAPTION: People line up for takeout meals outside Jaleo in Penn Quarter, where markers on the ground maintain prescribed social distance. (Marvin Joseph/The Washington Post)
mindyjourney wrote: Amazing kindness! Meal by meal, and heart to heart ....what beautiful souls shine thru such times ⭐️.