--by Ladybird1, posted Apr 15, 2020
One of my neighbours is an elderly gentleman. It is important for him to not go out, so I made him a pot of home-made soup and cheesecake, while also bringing him a bunch of blooms from the garden. He was chuffed! It looks like his wife is coming out of hospital 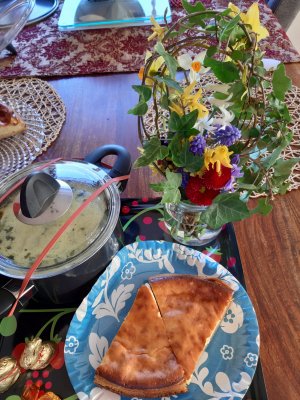 I also went shopping today, taking care to use complimentary hand sanitiser before AND after shopping and standing well apart from others. One lady looked very nervous, so I took another step back and we laughed about how popular soup-making is becoming again.

Rather than raiding the shelves to hoard items, I just bought what I needed. I also bought two flower arrangements from the florist who is selling them at the supermarket. I didn't really need the flowers, but I wanted to support the florist, as they are now hard hit for business and have to close their shops until the corona virus subsides. Let's hope that is sooner than later.