--by janmacfar, posted Dec 7, 2020
We had a wicked snow storm over the weekend. The city was brought to a standstill until crews and snow moving equipment could open up streets. Snow removal is a huge job. It takes days.

I live in a condominium.  My neighbors and I park in an outdoor parking lot. I haven't been able to go anywhere since last Friday, because my car, and everyone else's, are buried in snow.

The snow moving equipment was able to get through Wednesday afternoon and clear a path down the aisles between the rows of cars. We had to shovel out our own cars, though. I have a little red plastic shovel, and it took me 1-1/2 hours to clear off my car a 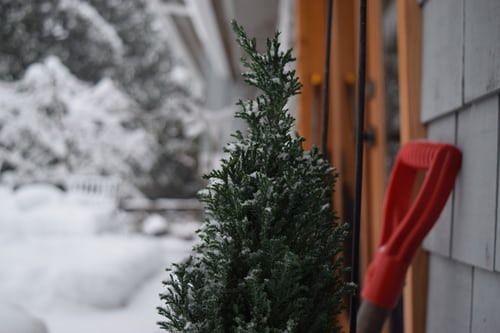 nd shovel snow from around it.

I headed back into my condominium feeling pretty great about being free again. My neighbour was at her doorway, so I stopped and chatted. She had numerous ailments and was not strong or well. She said she needed to get out, but she hadn't been able to shovel out her car yet. She thought the snow moving crew would come back and finish the job for her. I nodded that they likely would, but I knew they wouldn't. We live in a big city, and removal crews don't have time to shovel out individual cars.

So, last night after dark, I headed out with my little red plastic shovel, cleared off her car, and shoveled the snow away from around it. It only took an hour because her car is smaller than mine.

I had to take pain killers last night so I could sleep. Five months ago, I broke my shoulder and pulled muscles in my back. I have healed well and I have mobility back, but all the shoveling was just a little too much strain on it.

It was alll good this morning, though.  Even better, when I looked out my window, I could see tracks in the snow where my neighbour had been able to just hop in her car this morning and drive away. Doing good feels good

Riona M wrote: This is gorgeous - especially that you kept is anonymous! When kindnesses are done without knowing who has done them, it's like the universe is smiling :)
sher king wrote: Love anonymous kindness! Well done fellow snow fairy!
patjos wrote: How wonderful. And isn't it exciting to sneak out at night and secretly do someone a kindness? :)))
Diane J Klish wrote: It is small acts of kindness like this that will change peoples hearts and ultimately change the world. Bless you.
Christine88 wrote: Very nice story. Thank you.
Mish wrote: Bless you for doing that for your Neighbor! So awesome.
Balou wrote: So kind of you, to help hr even though you yourself are in pain now! I am sure she is super happy about this help! Sending you a big hug and hope your pain will recede quickly and you will be completely healed soon!
mindyjourney wrote: Our son had one of those little shovels! It would take a long time to clear any amount of snow â„ï¸. Thank you for helping neighbor with such a beautiful act of kindness. Please take care, my friend!
dotmatrix wrote: This story filled my heart with joy. Thank you for sharing it. You're such a great neighbor. â™¥.