A Morning When Everything Fell Into Place

--by Richard Whittaker, posted Aug 21, 2021
I’d driven down to Los Angeles to interview a well-known artist, and afterwards met friends in Culver City for dinner. I hadn’t reserved a room anywhere, and after saying good night, I ended up at a Motel 6 fifteen or twenty miles east on Highway 10. It was still hot outside, maybe 90 degrees. From the look of things, I was deep in gang territory. A young couple checking in ahead of me added to this impression. I was nervous and felt out of place, but ended up having a good night’s sleep. In the morning, as I was carrying my bags to the car, a young man standing in the parking lot shouted out, “Good morning!”
“Good morning,” I responded.
And then, continuing to look at me with his smile, he said, “Have a blessed day.”
His words were so unexpected and so genuine, they passed into an unguarded place in me that simply lit up. His gesture was a blessing, and could not have been more unexpected.
Getting into my car, and feeling lighter, I remembered the car needed gas. Glancing around, I noticed that right next to the motel there was a gas station. Great! I filled the tank. Okay. What about breakfast? Almost the moment that thought entered my mind, I spotted a restaurant across the street. Things were definitely lining up.
Walking in, I was led to a booth. It was a nice place—open, clean. A waitress came over, “Coffee?” Surprising how much one takes in so quickly. The way she wore her uniform, for instance. Impeccable. She was, I soon realized, an impeccable waitress. Her presence next to me at the booth left the space completely open. Nothing impinged on me at all. And yet, I was aware of her attention on me.
She handed me one of those over-sized, plastic-coated menus covered with photos and visual distractions and left. I sat there holding it in both hands looking for something simple, something not in a photograph. At the bottom of the page, I spotted a line of text: “Senior’s special”—one egg, two pancakes and bacon. $5.99. Right. That should do it.
It was hard to know all the sources of the state I found myself in as I sat there, at home inside myself – more awake, more open.
Now my waitress was back. I ordered the Senior Special.
“Don’t you want the “Fast Start”? she asked.
I hadn’t noticed that one.
She pointed to the menu—“See this one? Fast Start.”
I took a quick glance: $4.99, two eggs, two pancakes and bacon.
“You get more, and save money,” she pointed out.
I took a quick look at her to see if there was some hidden agenda. No. I didn’t think so. The Fast Start was clearly a better deal. Same thing, plus an extra egg and one dollar less! Hmmm. Why not? I ordered the Fast Start.
As she walked away I watched her, a middle-aged Hispanic woman, and couldn’t help feeling that something unusual was going on. Absolutely everything was falling into place with no effort at all. I was even being gifted with an extra dollar. It was almost as if I’d entered some zone of perfection.
That young man in the parking lot—at first, I was still in the grip of my fears from the night before. Then, when I did really look at him, I saw that he’d been waiting for that—for me to make eye contact. How fortunate I’d looked at him.
As I sat at the booth waiting for my Fast Start to arrive, I was beginning to believe there was something mysterious going on. No, that’s not quite accurate. Actually, that moment in the parking lot when I opened myself to looking at the stranger, when in that moment, smiling, he blessed me, in that moment, something inside was brought vividly to life like a small songbird.
In that moment, I knew something mysterious had happened.
I don’t mean to exaggerate. In the context of ordinary life, I could have passed over the whole thing and just called it a nice morning. But maybe we don’t look closely enough at thin 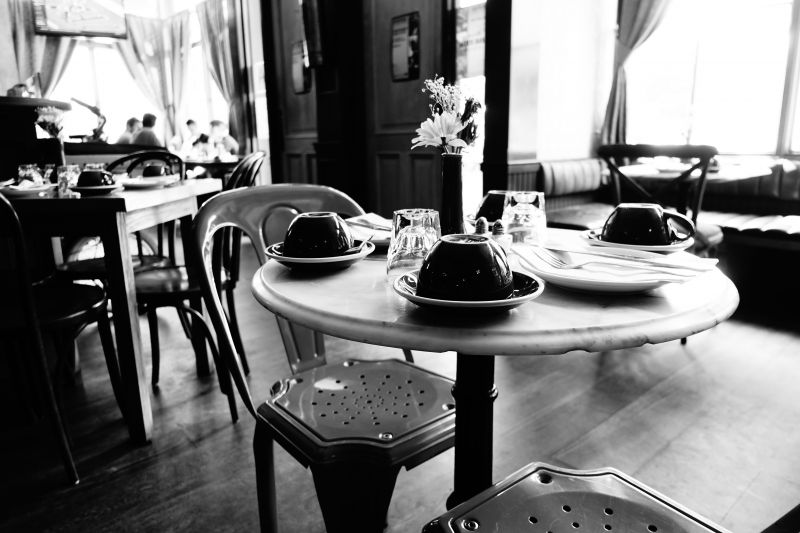 
My waitress brought the food. Walking away, she stopped at a booth across from me where a younger man was talking about different kinds of cell phones with an older man. I watched her. She did her job cleanly and without ornamentation and yet, keeping this measure in no way shortchanged the customer. Not at all. One could say, this woman was a thorough professional. That’s one way to put it, but my thoughts flew past that into a world I didn’t know—but had sensed, a world where one lived, approached one’s work—like a warrior, perhaps.
The way of it, which I was watching from my plate of pancakes and eggs, was almost invisible. Nothing like I’d imagined.
As I ate my breakfast, at a certain point, I begin to think about the tip I would leave. Certainly, I’d give the waitress the saved dollar. I’d add it to my usual tip. But why not more? The thought filled me with a little charge of happiness. I’d leave a ten-dollar bill! That would be pretty generous. What would that be? 60% or so.
Then, as I was finishing off the last bite of scrambled egg and already feeling the pleasure of my unplanned generosity, something else entered my mind. Maybe the ten dollars was too easy. Didn’t this morning call for something more? I’d been transformed not only by the generosity of others, but by seeing into a world I hadn’t known; it was so much bigger than the one my fears painted. In gratitude, I had to give back something that counted, something from myself.
662 Reads

Rio wrote: This is beautiful, and i know exactly the state of mind you describe. It seems so simple when you step into it, so clear, and yet so transformative also. I am not religious but i too have felt blessed by strangers, in the most straightforward and yet breathtaking ways - a simple clarity of service, a kind word, a commitment to doing things well. These are the moments to hold on to. And those impulses of generosity the ones to hold on to.
PL wrote: In the last few months, i've really opened my eyes to the blessings i've received everyday. I thoroughly believe god sets these situations in front of me, yet often i am too distracted, busy, or "blind" to them. Thank you for sharing your story. And have a blessed day!

Robert Caldwell wrote: And i have been blessed to receive this story in my e-mail.
Daphne Bush wrote: I call these moments, god moments, when our hearts are completely open to receive the gifts awaiting us. A woman approached me in a parking lot one evening asking for money. I stopped, looked into her eyes and asked her why she needed it. She said she had just gotten out of prison for passing bad checks and needed a place to sleep. My heart opened even more and i gave her everything i had. I blessed her and she blessed me. In that moment, we were one. This all took less than two minutes. She went on her way and i was humbled and grateful for the gift she gave me.
Tracey Kenard wrote: I've been blessed to have days like that. They're pretty amazing!
mindyjourney wrote: Hmm…i’m wondering what tip did you leave? :))