A Stolen Trombone and the Necessary Kindness

--by penny4them, posted Jan 23, 2022
A couple of months back, my son Shine had his trombone stolen from our car. Very sad. We learned a lot. We were angry. We were disappointed, then we moved through that and learned and felt compassion for the person who stole it.

We also learned that telling friends about our sadness connects us, and makes it feel, well -- less icky.

We received sweet messages of condolence all over the world from friends expressing interest, to people chipping in for the next one. Shine received the sweetest letter from a classmate reminding us that although things in life can be sad and painful, kindness is everywhere to be found (and money was included towards the new instrument).

And then, another radical act of kindness, a student at a different school heard about the situation and decided he no longer used his trombone (he'd moved on to other instruments) and that he wanted to gift his trombone to my son. It turned out it is the same kind as the one stolen.

We got a chance to meet this young man, who only asked one thing and that was that Shine never
stop 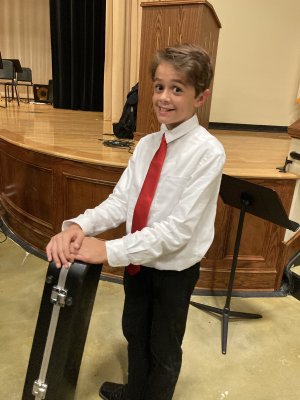 He said that he had a really good music teacher who led him to other instruments and that it was the best decision he had ever made. We were so grateful and so happy. Shine had his first band concert ever a couple of weeks back. (See that charmer with his new trombone ðŸ˜‰). One thing about kindness is that to the receiver of kindness it might not feel necessary, but to the giver who sees an opportunity to change things for the better--the kinder--it becomes absolutely necessary. Kindness is saving us all in billions of seen and unseen ways, every day!

We are deeply grateful for everyone's sweet notes, comments, and concerns. We are grateful to a 16-year old young man and his mother for their necessary kindness. And we are grateful the trombone was stolen in the first place. It taught us so much about the healing powers of community, even people we have never met before.
2006 Reads

cabbage wrote: Wow! As the mother of a trombone player this touched my heart so deeply. I am so glad that you and your son were the recipients of such kindness :-) thank you for sharing this powerful story of community!
Dela Ree wrote: What is a trambone?
pluto178 wrote: What a great attitude there is always good in the bad if you dig deep enough. I hope he becomes a world class musician x
Mish wrote: Simply WOW, Penny!!!! Thank you for sharing this here. And your son is so adorable â¤ï¸
mindyjourney wrote: Beautiful circle of musical ðŸŽ¶ kindness ðŸ’•! And love that Sonshine smile ðŸ˜Š.
lt33 wrote: What a great ending your son is a cutie look at that smile ðŸ˜ that's so wonderful you got to meet the young man that gifted his trombone and others were pitching in to help with contributions + support ðŸ˜Ž
unknown wrote: A great post of kindness adventure from your end ... Your son looks smart ... And bless the other kid ðŸ™
gardengal10 wrote: The universe does work in wonderful and strange ways, doesn't it?
truthunltd wrote: Kindness at its best. Your son has a beautiful face, great smile & powerful eyes. May God Always Bless him & all others in All Ways.
dotmatrix wrote: This is a wonderful story. Wow. I'm so happy about the kindness you and your son received. My son Ben played the trumpet and it meant the world to him. I know how devastated he would have been if it had been stolen. He went on to become a wizard at the piano, too, and composing his own songs. Music heals the world. â™¥.
Pages