Planting Perfection One Cutting at a Time

--by patjos, posted May 8, 2022
Most of my morning walks take me up a quiet road near Glentarkie and returning home along the edge of a couple of fields. I love this little walk which takes around 45 minutes and passes some of my favourite foraging areas.

Later in the year, I’ll collect crab apples, brambles, raspberries, rose hips and elderberries and if I remember some elderflowers to make cordial. The rest will go towards jams, wine and chutneys.

As it’s become ‘My Walk', I’ve also cleared up most of the litter from the roadside verge, mostly for my own benefit, but I know that others must enjoy it being litter free too.

I’ve noticed too that there are stretches of grass verge where there are no shrubs growing, which is a shame as the wee animals and birds could be hiding there or making their homes.

Last year I considered planting hawthorn along the verges, but raising them from cuttings or seed seems to take two years which put me off! However, walking along there earlier in the year I decided to plant some daffodil bulbs which I had spare in my garden. These went in the ground at the very start of my walk. Next it was time to split and plant some clumps of snowdrops, just little clumps here and there over a quarter of a mile or so.

Then I noticed two rogue buddleia growing out of a pavement edge in the nearby car park so I transplanted them at either end of a little road bridge crossing a stream. This brought my attention to some pussy willow that was growing there. Well, we all know how easy it is to root willow so I took a few cuttings and transplanted them further along the stream where the banks had eroded.

Which in turn finally made me think about which other shrubs were growing nearby and a quick internet search told me that Elder (sambucus) would root as easily as willow. Off I went into one of my foraging areas and found a lot of elder which had put on shoots of spring growth.

I’ve cut a about 50 without taking more than a single branch from any one shrub and divided these into suitable lengths.

These days my walks also include looking for likely gaps in the hedgerows and planting an elder or two straight into the soil, coming back later to water them.

What a joy! I have since taken softwood cuttings from wild roses and made willow tea as a rooting agent. Today on our walk I managed to gather half a dozen teeny holly saplings from under an old holly bush. I have plans for those verges!

I have been rewarded with lots of wildlife sightings, a vole next to where I was planting, a heron on a roof, another startled me by a stream, a raven, and a sparrowhawk having its lunch at the expense of a wee blackbird. Our neighbourhood hedgehog is back from hibernation too! 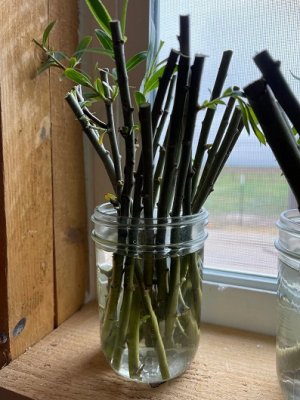 Mish wrote: How lovely, patjos & so enjoyed hearing about your Spring outings 👍
fairykats wrote: This sharing of yours made me so happy!
DANCE wrote: It is so lovely to read about your walk and what you do to look after the area. How very nice of you to care and grow bits here and there...
pluto178 wrote: I absolutely love this it is literally full of love……..as for hawthorns and roses take a cutting and stick in the ground then walk away next year you will see most of them will grow on without any further assistance………..you don’t have to be so precise when gardening…buying compost, pots, equipment not necessary garden the chaos way of the Pisces cut it off stick it in the ground and voila…………bulbs you need to add though and watch them naturalise………….I fancy a walk there it will be beautiful……..less celandine under the hedges is nice too always choose wild flowers and you wont mess with the eco system………….go girl I want to hear more of this in the future we are now on that journey with you x
pluto178 wrote: Gosh I feel invigorated lol x
TheHuman wrote: You are really doing Great! I am happy with you. Wow you made my day.
TC wrote: Such joyful and productive walks. You see with more than your eyes, you see with your heart and give love to the earth with your tender care. Enjoy your day.
drjoybug wrote: I wish we could do that here, but verges are mowed by the local government.
gardengal10 wrote: You are one with nature!!! I wish that my walks were in areas as scenic as yours!
Balou wrote: Love your enthusiam to make your area more habitable for animals )and beautiful for humans). Let us know how the saplings are faring! Elder and Holly .... sacred plants ....
Pages