If You Thought This World Was Small

--by David G. Nadeau, posted Sep 11, 2019
[A while back, I wrote a story about my 9/11 experience -- One of a Thousand Stories to Tell.  The story took me two years to write, but I never realized that so many would be touched by it.  Thank you for all the heart warming comments.  Below is a follow-up story.]

When I went back to New York in April of 2002, we went to the Port Authority Command Center to offer the money that 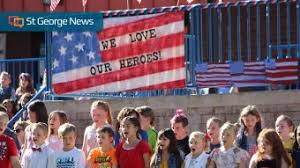 our local firefighters had raised -- $31,600. They took us down to Ground Zero in 2 of their police vans to present the check.

"Where are you from?" the driver of police van asked all of us.  I said, "Michigan."  He was very moved by what we were doing for them, and the families of the Port Authority Police would benefit a lot from the money.

As we were presenting the check at Ground Zero, the Police Officer that drove me down there said that on 9-11 he was on duty and had seen the people jumping from the towers. He then said the next day he was put in the command center because they did not want him at Ground Zero because of the things he had seen.

And then, he told me that there was a firefighter from Michigan that kept calling the command center on 9-12-01 asking for directions.  "He gave me his name, so when he did call back, I could talk to him," he said.

He looked at me, and at the same time I looked at him; I asked him his name he told me. I then looked down at his name tag; it was the same name I wrote down on a piece of paper back on September 12, 2001.

You see, I had to call the command center several times to find my-own-why to Ground Zero; I still have that piece of paper with this Port Authority Police Officers name on it.  When we both realized how small of a world this planet really is, we hugged and shook hands. What are the odds that the same police officer (out of thousands) that gave me directions on September 12, 2001, drove me back to Ground Zero in April of the next year?!?

I believe we all have a purpose in life; there is no way to tell the feeling I have about September 11, 2001 and the lives that have been touched by the hands of God.
3539 Reads

babynurse wrote: I always say everything happens for a reason, and God brings people into our lives at certain times, to meet a particular need. God just let you know that He is so great and awesome that He could at a later time, let the two of you meet. He is always in control!
Margarita wrote: Reading this story makes me realize that there is NO such thing as coincidences. Everything MUST happen for a reason. God always knows when-why-where...
JuneBug wrote: Keep up the good work,David! We need more people like you in the world!!!
Pages