The Story Of A Wandering Wallet

--by francesf, posted Aug 9, 2020
A few years ago, I was given a wallet. It was small, with only a single pocket for cash, cards and coins. A zipper kept everything inside from falling out and a beautiful elephant was woven into its front panel. The wallet came to me all the way from Tanzania, gifted to me by a close friend. I fell in love with it immediately, it was the perfect size and came from a place I hoped to someday visit. I carried it everywhere; it was always precariously hanging out of one pocket or another.

But the wallet was not only beautiful; it had a personality: it loved to run away, as I told my parents over and over again, only to receive eye rolls in return. “Frances, really, you’ve lost it again?” they would say every time I misplaced it.

I seem to have a habit of losing things— jackets, water bottles, text books, even shoes. And every time I would report another loss, my parents would have a harder time believing it. “I swear,” I would assure them, “it just ran away from me,” Unfortunately, they never believed that, and so often I was left to search and frantically pray for the items to come back to me.

Even so my wallet was special; I lost it almost weekly. Fortunately the most common place for me to lose it was in my own house, so of course I would eventually find it.

One day, however, as I was leaving a football stadium at a school, the wallet once again leaped from my pocket and onto the ground. I discovered the loss when I got home that evening and prepared to tell my parents. They refused my usual “explanations,” and frankly I was also a little dubious: after all, I wasn’t certain that I’d lost it; I only knew that I couldn’t find it.

I searched the house, as usual, and I prayed and prayed, as usual. Nothing. But then, around a week later, my parents received a message on their business voicemail. A complete stranger was calling with news of my wallet. “I’m calling for Frances,” said the stranger’s voice. “I think I’ve found her wallet.” I couldn’t believe it. This man, in an attempt to find who the wallet belonged to, looked inside of it, and found a check which my parents had written to me. It happened to have their business phone number on it. A week later we went to retrieve the wallet. Returning home, I wrote a long letter to the man expressing my gratitude, and remarking on what an amazing act of kindness he had committed and that he was truly a remarkable person for going out of his way to get my wallet back to me. I would be forever indebted to him, I concluded, and mailed it off to him.

As I learned about a year later, lo 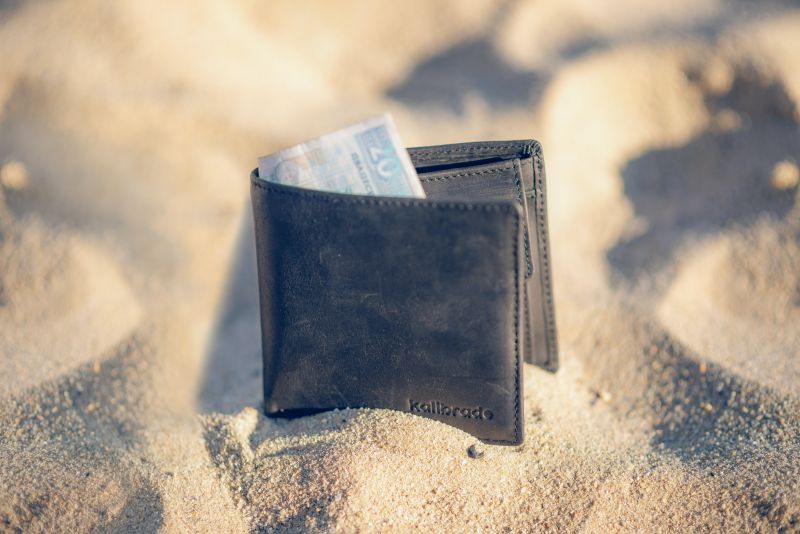 sing wallets seems to run in my family. One day, as my mom was out visiting my uncle in Danville, her wallet too escaped her purse and landed on a sidewalk. Someone walking by found it lying on the ground and turned it into the Danville police. My mom came home with the news that she had “misplaced” her wallet, and I had to struggle to suppress a smirk. For once it wasn’t me! A day later, the Danville police called my mom, and when she picked up the phone a police officer delivered news of the found wallet. My mom was overjoyed, and the next day she went to retrieve it. She told the officer that she couldn't make it out to the station until later in the day, but the officer said that that wasn’t a problem and promised to stay there a couple hours late just so she could come and pick it up at her convenience. Both me and my mom were incredibly grateful and amazed. More strangers going out of their way to commit acts of kindness.

Of course that was not the last wallet to be lost in the family. A short while later, my wallet once again went missing.

I was on my way home from school with a couple of friends. We had taken BART (the bay area rapid transit system) and exited a station in downtown Oakland using our BART cards. Mine was inside my wallet. Once on the other side of the turnstile, I put the elephant pouch back in my pocket and set off for the rock climbing gym, where we would spend a couple of hours before going home. When I got to the gym, I reached for my wallet only to find it wasn’t there. This time I panicked.

On the busy, crowded, traffic-filled streets of downtown Oakland, there was no way I would find my wallet. But it was too precious to give up without a search. I had to find it, so I began to ask for help. Soon I had ten rock climbers, in their strange attire, running down the street alongside me asking whomever they encountered if they had seen the small elephant wallet. Sadly, no one had. We searched frantically for half an hour, and then gave up. I knew that was it, I had finally lost it for good. I went home, distraught, and told my parents.

A few weeks later, I got an email from my school. I opened it and read the message. It said that a man had found my wallet. He’d left a phone number. I called the number and someone answered. I couldn’t believe it! Why was I so lucky? Why did people go out of their way to get this tiny zippered sack back to me?

He confessed that not he but his wife, who often walked the same route I was on when I dropped my wallet, had found it on her way home and had decided that, by the looks of it, it meant a lot to someone. We arranged for a retrieval and I worked on writing another long letter expressing to them my gratitude. Also, upon getting my wallet back I learned of an amazing coincidence. The man and his wife belonged to my synagogue.

I don’t know if I believe in chance or luck, but I do know I believe in humanity and in the selfless acts of kindness, which abound in my life. Everyday my hope for the world is renewed when I remember all of the people who go out of their way to help whomever they can.

Lisa J wrote: I love thinking in reverse. What lost me vs. â€œi lostâ€. On a recent road trip my phone and then my wallet with credit cards and cash lost me but some wonderful human turned it into the gift store. Same with the phone found in a parking lot before someone ran over it.
petroskryf wrote: What a lovely story! There are still so much goodness in the world.
Nugget wrote: Hope and faith.
smileswithhope wrote: So beauuuuutiful. Thank you for this incredible story that reaffirms faith in humanity! :)
Mish wrote: Your kindness to others attracts kindness back to you. Thank you for sharing this here...I enjoyed reading your post. ðŸ‘â¤ï¸
mindyjourney wrote: Found â€” kindness! :)))) Thank you for sharing your story of wallets lost and found.
pluto178 wrote: Somehow I guess you are not going to learn......have you seen the chains you can get for your wallet to attach it to your belt. Or you can keep testing the Universe to see if they support you or one day you will learn the lesson .......otherwise apply for a job in the lost and found locally........you cant fail x